Hot Cross Buns remind me of this nursery rhyme, but besides the song which is from English literature, there are more traditions wrapped around these raisin-spice buns than the stripes on top. Typically served during lent and especially on Good Friday, the origin is a mix of Christian and Pagan traditions. Aztecs and Incas considered the buns a sacred food of the gods: to other ancient cultures the cross represented four quarters of the moon; others believed the cross held supernatural healing powers. Christians interpreted the ‘cross’ of icing as the cross of Jesus, and in the 12th century it’s said an Anglican monk placed the sign of the cross on buns to honor Good Friday, which at that time was known as “Day of the Cross”. There’s even the tradition that Hot Cross Buns were the only food one could eat on Good Friday.

Raisins or currants are characteristic to Hot Cross Buns, which set me to wondering about the history of raisins.  Since I have created recipes for Sun-Maid, I checked with them. Their historical fact checking has found evidence of grape leaves in fossilized remains from roughly 12 million years ago, and earliest recorded mention of dried fruits on Mesopotamian tablets from 1700 BC. At that time dried fruits were used in breads and on spiced honey cakes for royalty.  So, compared to the first dried fruits, hot cross buns in the 12th century are a relative new-comer!

For today’s baker, this Hot Cross Bun recipe is made with a dough you can let rise overnight in the refrigerator, then shape and bake in the morning. Or bake the rolls ahead, freeze, and set out for a few hours to thaw and lightly reheat for Good Friday and Easter gatherings.

Recipe adapted from Sun-Maid.
Recipe up-date:  If you like an extra soft bun, try the Tangzhong method mentioned in the notes. It works great!

If you like a very soft bun, do use the Tangzhong method described in the recipe notes. To make this recipe ahead, let the dough rise overnight in the refrigerator. Allow about an hour for the dough to warm up a bit before shaping and baking.
Prep Time20 mins
Cook Time25 mins
Proof1 hr 30 mins
Total Time2 hrs 15 mins
Servings: 20 buns

For a softer roll that lasts a few days longer, King Arthur Flour suggests a Japanese method that takes 1/2 cup of the milk and 3 tablespoons of the flour, then whisking together and cooking over low heat in a saucepan to make a thick slurry. The slurry is then added to the dough and mixed with all the ingredients. It is called Tangzhong technique.
Share
Pin
Tweet
Email
Print
Previous Post: « Irish Raisin Soda Bread with Orange Zest
Next Post: Asparagus Risotto – made easy! » 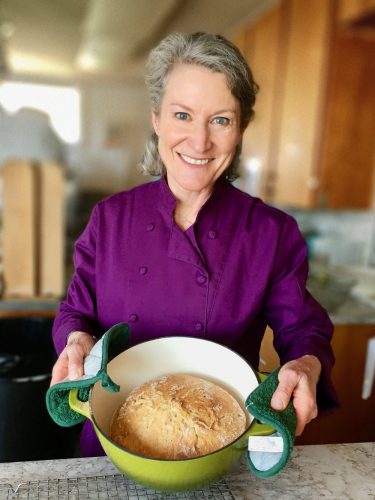